Driving Off into the (Forza) Horizon (2) 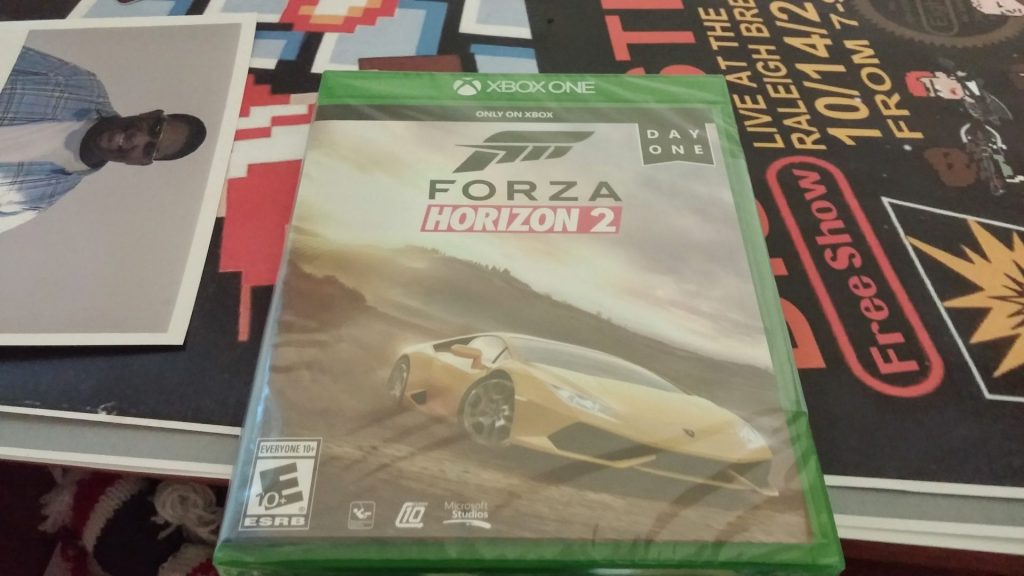 Ladies and gentlemen, it has finally arrived! Well, not really seeing as its been in my possession for over a week now. Of course, I’m talking about my most anticipated title of 2014 since it was announced in June at E3, Forza Horizon 2! I have played it for almost the entire time that I wasn’t asleep or at work (I played my weekly Madden game on Thursday and had a couple of errands to run) and I must say this is shaping up to be my favorite title of the current generation so far.

When I saw the game being announced during Microsoft’s presser for E3, it made me go against what I initially said about my criteria for buying the Xbox One. I had made countless statements that I wouldn’t buy one until they let me use it as a cable box and not a supplement to one as it currently does. I almost considered buying it for the ESPN support when I learned they were moving apps from behind the Xbox Live paywall including ESPN. That was shelved when Google stated that the WatchESPN app officially had Chromecast support for all content including live TV. There was nothing on the table currently that would make me actually want to own an Xbox One except for having new shiny tech in my house.

However, when it was announced that a sequel (if that’s what you call racing games that have an incremental number attached) to a game I spent hours upon hours into on Xbox One, I literally stopped working (I was watching the event at work on my laptop), watched the entire trailer, and then proceeded to make arrangements for me to buy an Xbox One that day. It also happened to be the day when they were selling Kinect-less Xbox Ones, so it made the decision even easier (even though I regret not having a Kinect (I’m a very lazy person)).

So, what is it that draws you to the game?

Two words: Driving and music! If I was around for the introduction of the radio, tape deck, CD player or any other audio device into a car to listen to music while I drive, I would have lost my shit! I bought my Scion xB for the following reasons:

Obviously, the most important is in bold because I love to listen to music (and podcasts) while I drive. It allows me to cut out all the distractions around me and focus on my driving. I have special playlists for driving and the type of drive that I want to have. In Forza Horizon 2, its as if they took the racing part of me along with the playlist and put it in 1080p on a television screen with nicer cars than my xB (which I love).

The music in this game is phenomenal. I know a lot of people, especially in the States, probably don’t care for EuroPop or EDM, but I’m a big fan of EDM and Playground Games has yet again found a way to marry the best of European EDM with the racing. There didn’t appear to be much dubstep this time around, but I am okay with that. I’m starting to fall out of the dubstep scene for a bit, anyway. I’m pretty sure the EuroPop stations work well with the game, but I didn’t stick around log to find out. They’ve added a few new radio stations on top of what was previously offered in the first one. These stations appear to be record labels playing their greatest hits and I have actually fallen in love with one of them.

I’ve never been one to use racing wheels when it came to racing games because a particular game ruined it for me growing up. It was an Initial D game that actually moved as you turned and unless I can get a setup like that again, I don’t want a racing wheel. Playing with a controller works fine for me and it actually helps with other games with hand/eye coordination which seems to be the only thing that keeps me employed most of the time. With the controller, the game was very responsive. Also, I have to give it up to Microsoft with their new controller. The trigger rumbling helps out a lot (I still feel like the best effect for the trigger rumbles was reloading a shotgun in Destiny).

The sense of speed in the game is top notch. I was able to tell when I was driving the most stable of cars at a high rate of speed and when I was driving in something that would have killed me in 5 seconds flat had I been driving in real life. Between the visuals and sounds, the game does really convey a difference between driving a VW Scirocco  and a McLaren P1 and everything in between. You pick up subtle differences between two classes of cars that hit about the same top speed but have different acceleration rates and handling. You learn quick from driving around a few seconds that one will require less gas and more brake just to go down the streets of Europe

Speaking of Europe, the game takes place in southern Europe along the Mediterranean Sea instead of the landlocked Colorado (which is still awesome because that area was abandoned and the perfect place for a summer long rave with awesome cars). In Europe, the Horizon Festival is still happening (not sure if its the European version or if Colorado kicked the festival out as I haven’t checked the Forza Horizon lore). However, this time around, it appears they have taken over multiple locations. They have a main hub which you drive to as the opening “tutorial” and many hubs where all of the events take place. You reach these places by driving there by yourself to explore or you can take “road trips” with other drivers to start championship events.

Championships are chosen before you embark on each road trip. Along with the championship you choose, you are asked to purchase a car, if you don’t already own it, to participate in that particular championship. You have 3 championships per road trip before heading back to the main festival for the “awards ceremony” and “all-night partying”. I like the road trips because it allows me to test the car I just bought before I get serious with it in the races. That is how I got used to the various cars as you can choose paths that have you driving rally cars to hyper cars to American muscle cars to extreme toy cars, all of which handle so much different than the other.

Some championships actually let you take your cars off-road and I don’t mean like makeshift rally tracks. I actually mean off-road. Your race could start in the city streets of Nice and you would end up in the countryside driving through some farmer’s crops and back on some more streets before driving off again to dodge trees. This actually even translates into the roaming sections of the game as well. This translates to actually proving that the quickest way between two points is a straight line as you can choose whether or not you want to follow the roads to get from point A to point B as long as it isn’t a race with checkpoints.

So, I take it the game doesn’t crash and burn…

Just like with everything, it isn’t without its fault. As we know, nothing is ever perfect. The first thing I would like to point out, which I imagine isn’t going to be an issue anymore as it seemed to be a launch thing, was the slightly heavy ties it has to online. I’m not sure if the game can be played offline, but during launch it was evident that parts of the game that didn’t really need online components were having some issues. One example is when you finished a race, you get your credits and XP for finishing a race. Due to the online issues, it took longer than expected, sometimes even two minutes actually be awarded any credits. Its no longer an issue now, but it may be a bother for some who may have spotty Internet connections or if something does happen to the servers while you are playing solo.

I’ve also been experiencing some issues with slight freezing (screen wouldn’t move for about two seconds, even while driving at high speeds) and the occasional game crash. Yeah, game crash, not car crash. Over the weekend, I had been dumped to the Xbox One home screen twice after some glitch had occured and bugged the game out. Given the fact that games are now even more complex than before and a multitude of factors can happen during normal game play, I’m not too worried about it. Besides, at that point, I had been playing for far too long and most of it happened while I was going insanely fast and may have actually beat something that was supposed to be loading before I got there.

While I do praise the musical selections in the game, I ran into a similar issue with the first Forza Horizon. There isn’t enough music in there that I would like to hear. I think it would be nice if they released more tracks over time. Last time, I thought it would be cool if they simulated a real radio station. During the course of the summer, an artist may put out a new track and it would start playing on the radio. So, for Forza Horizon, they would actually have song packs with new music to infuse into the game. I might would actually pay for those packs or include them with cars packs.

The last thing I would like to mention is that in head-to-head races with the various Drivatars roaming about, there is apparently a sweet spot for the “imaginary” finish line. In head-to-head races, you get behind another car, hit a button and an impromptu race starts with a suggested path for you to follow to get to a specific destination first. Most (if not all) of these destinations end in very random places. Its one thing if it ended on a road that had no guardrails or a mountainside to make a boundary, but most of them ended up in those areas. If you ended up coming up to the finish riding the guardrail, you run the risk of driving around the sweet spot while your opponent wins which kinda sucks.

Would you rather be playing something else?

No, sir or ma’am! As I stated before, I had been looking for a game like this since the first Forza Horizon and looking forward to this game since its announcement! It was the reason I bought an Xbox One in the first place against all the reasons not to and since its release, I haven’t regretted buying the system 3 months early solely to anticipate this game. I feel like a game that can make me spend $400 when I didn’t need to and still be on my mind even after a week of seemingly nonstop play, I feel like this game is my frontrunner for Game of the Year. Now, I know I haven’t played Far Cry 4 yet, but right now, I would totally be happy if no other games came out this year!